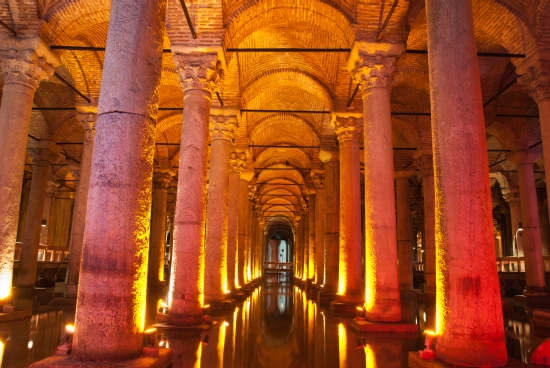 This Underground Bascilica Cistern is thought to have been built after the Nika revolt in 532 AD. It was known as the Basilica Cistern during the Roman period, as there was a Stoa Basilica above the pre-existing one at the time.

After the conquest of the city by the Ottoman Turks, it was forgotten of and nobody knew that it existed. Re-discovered in 1545, it was used to water the gardens of Topkapi Palace.

Today it has a rather eery and mystical ambiance. Clever spotlighting makes the water shimmer with colored dancing lights and the water ripples from an occasional fish swishing its tail in exuberance.

Choose from a range of private Istanbul tours at www.toursistanbul.com conducted by
official Istanbul tour guides.